Books of Latinx #QueerLove We All Need Right Now

Please add your favorites and go-to’s in the comments section below.

“Prepare yourself to dance in a disco in Silver Lake, check out papis in Orchard Beach, cross the border from Guatemala to Mexico on your way to the U.S., see a puro macho bathe in a river in Puerto Rico, make love under a full moon in the Dominican Republic, sigh at a tender moment in an orange grove in Lindsay, visit a panaderia in Kansas, see a full blown birthday party in Juarez, and be seduced by a young artist in the South Bronx. These are some of the stories in this collection of thirty gay Latino writers from around the United States. There are ”don’t mess with me”’ divas, alluring bad boys, and sexy teenagers, but also empowered youth for whom being queer is not a question and a family that grows wings on their heads. The infectious rhythms of House music in New York City are adjacent to cumbia in Mexico, next to reggaeton in Puerto Rico, alongside Latin pop in L.A. and merengue in an east coast city. But the spectrum of experiences and emotions that inhabit our days gives these stories dimension and gay/queer Latinos a common ground. The stories are vibrantly varied and clearly connected in this ”era of lost signals” in which we live.”

“Luis Negrón’s debut collection reveals the intimate world of a small community in Puerto Rico joined together by its transgressive sexuality. The writing straddles the shifting line between pure, unadorned storytelling and satire, exploring the sometimes hilarious and sometimes heartbreaking nature of survival in a decidedly cruel world.” “Rooted in Gloria Anzaldúa’s experience as a Chicana, a lesbian, an activist, and a writer, the essays and poems in this volume profoundly challenged, and continue to challenge, how we think about identity. BORDERLANDS/LA FRONTERA remaps our understanding of what a “border” is, presenting it not as a simple divide between here and there, us and them, but as a psychic, social, and cultural terrain that we inhabit, and that inhabits all of us.”

We the Animals by Justin Torres

“In this groundbreaking debut, Justin Torres plunges us into the chaotic heart of one family, the intense bonds of three brothers, and the mythic effects of this fierce love on the people we must become”

“This collection of poetry is a cleansing and transformative journey that takes us from rage to love with a depth of emotion and beauty in words that is breathtaking. The first part, ‘Rage,’ communicates the rage and anger caused by injustice, in immediate and visceral ways. The transition into ‘Making’ has all the mess and beauty inherent in the seasons of autumn and spring. After the rage, after the making, we have ‘Love.’ And the sweetness, caring, and compassion of these poems is a soothing balm after the rage. Yet, it also underscores that deep love, more than anything, fuels rage over injustice.”

“Set against a vibrant South Bronx neighborhood and the queer youth culture of Manhattan’s piers, Chulito is a coming-of-age, coming out love story of a sexy, tough, hip hop-loving, young Latino man and the colorful characters who populate his block. Chulito, which means “cutie,” is one of the boys, and everyone in his neighborhood has seen him grow up–the owner of the local bodega, the Lees from the Chinese restaurant, his buddies from the corner, and all of his neighbors and friends, including Carlos, who was Chulito’s best friend until they hit puberty and people started calling Carlos a pato…a faggot.Chulito rejects Carlos, buries his feelings for him, and becomes best friends with Kamikaze, a local drug dealer. When Carlos comes home from his first year away from college and they share a secret kiss, Chulito’s worlds collide as his ideas of being a young man, being macho, and being in love are challenged. Vivid, sexy, funny, heartbreaking, and fearless, this knock out novel is destine to become a gay classic.”

“Discovered by Martha Divine in the backstreets of San Juan, picking over garbage, drugged out of his mind and singing boleros that transfix the listener, a fifteen year old hustler is transformed into Sirena Selena, a diva whose uncanny beauty and irrisistable voice will be their ticket to fame and fortune. Auditioning for one of the luxury hotels in the Dominican Republic, Selena casts her spell over Hugo Graubel, one of the hotel’s rich investors. Graubel is a powerful man in the Republic, married with children. Silena, determined to escape the poverty and abuse s/he suffered as a child, engages Graubel in a long seduction in this mordant, intensely lyrical tragi-comedy – part masque, part cabaret – about identity (class, race, gender) and “the hunger and desire to be other things.”

Empanadas by Anel. I Flores.

“The voices in Empanada’s kitchen will definitely not be shy! Each probadita is told from the bustling space of the kitchen and heavily spiced with hurt and yearning, lust, desire, passion and bliss. Each bite of Empanada will take you on a journey through the heart of Paloma, a young lesbiana learning to maneuver her loving heart through a culture of judgment. This collection of vignettes is divided into three macroscopic sections: Food, Religion and Sex where personal, cultural and gender identity are in constant flux, but finally birth a new geographic space in Latina, Chicana, Mexican and Lesbian literature and lesbianidad.” “The words captured in this volume of poetry perfectly capture a moment in time in which we all are in flux and yet still very much grounded in the moment. Personally, these poems speak to my being, my sexuality, my erotic desires, my future hopes and my wishes for new generations and yet they also stand for the danger that those words might also be fragile and easily forgotten. It is up to the reader to make these words count for something. And, simply said, it’s just an amazing and moving collection of poems that truly represents who we are as queer Latinos at this crucial moment in time.” -Andrés Duque, LGBT rights activist

“An 800-year-old tradition of Hispanic poetry gets a substantial augmentation, and at the same time, a wondrous makeover, with the rich, varied, sensual, often bi-lingual work in this collection. It helps that the translations by Xavier are so true; and that the poets amassed from all over the Americas, are mas o menos gay in subject matter and attitude.” – Felice Picano, author

Loving in the War Years by Cherrie Moraga 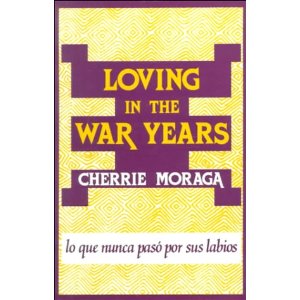 Along with Borderlands, this book was the most mentioned by anyone we asked. “Weaving together poetry and prose, Spanish and English, family history and political theory, Loving in the War Years has been a classic in the feminist and Chicano canon since its 1983 release. This new edition—including a new introduction and three new essays—remains a testament of Moraga’s coming-of-age as a Chicana and a lesbian at a time when the political merging of those two identities was severely censured.”

For Colored Boys Who Speak Softly by Yosimar Reyes Also see the poetry and writing of Alan Peleaz Lopez and Sonia Guiñansaca.