I’m a big fan of Vicko Alvarez Vega’s work ever since she started ScholaR comics. She’s the person who drew the “why the x in Latinx” explainer for Mijente’s first Lánzate convening. But when I saw she was publishing a new ‘zine to help kids express their feelings of fear when it comes to immigration issues, I wanted to know more.  Luckily, she sat down for the exchange below.

This comic artist helps immigrant children cope with their fears of deportation.

N: What was the inspiration behind Rosita Gets Scared? How did the comic and story come to be?

V: Rosita Gets Scared is part of a series on emotions, emotions of youth of color. I’m studying to be a teacher with a focus on social-emotional learning, and I saw that a lot of the material was generic – it treated kids as if they were all the same, as if they all have similar fears, or they all share similar ways of addressing sadness, and I didn’t see anything addressing kids of color. I already had my comics going, and it just made sense. The characters in the series are more or less in the age range of middle school, which I think makes the stories interesting because by that age you start to get more aware of what’s going on.

N: Why a comic, specifically? Were you always into drawing comics?

V: Comics are fairly new to me. I started my Scholar comics series about 2 years ago. It started off as therapeutic for me. I used to be an organizer; I organized hardcore on a national level with the labor movement and it was so much work that I started ignoring what I really enjoyed for myself, like art. I was traveling so much that I hit a wall and it basically got to a point where I had to stop everything I was doing and come back to myself.

I had to stop everything I was doing and come back to myself. The easiest way to do that was to literally pick up a pen and paper and start doodling.

The easiest way to do that was to literally pick up a pen and paper and start doodling. Every kid doodles on their homework or in art class and maybe they think it’s not that great but they enjoy it, it’s fun, and I think we lose that when we get older. We lose our desire to do art and do fun things ‘cause we think about careers or whatever, and that’s where I was. When i started doodling, I started creating actual characters. Before I knew it, I was drawing myself — ScholaR is basically me. I’m not a comic dork, actually I gave up comics when I was little because all the women had big boobs and the stories seemed male centered and the past couple of years I realized I can make my own comics. So it made so much sense to not just have fun with it, but use it as an educational tool for other young kids also.

N: What do you hope happens with Rosita Gets Scared?

V: I wasn’t surprised by the reaction, but… I kinda was. When I first created it I created it as a tool for adults to use to talk with young people and I think since then I just sort of realized how much this is needed. I’ve gotten requests from all over the country to get the zine in youth theatre programs and legal offices — locally, too. I feel like when it comes to organizing, people are starting to realize in the midst of organizing as a response to emergencies that adults might have forgotten the kids.

I feel like when it comes to organizing, people are starting to realize in the midst of organizing as a response to emergencies that adults might have forgotten the kids.

They may have forgotten how to talk about these emergencies with young people, and I think it’s young people who started to call them out on it and started to express feeling confused and lost. It’s nice to have like, an arts and crafts table at a meeting but let’s not underestimate how much young people can actually understand and participate in the meeting. These things have to do with their community, that’s their community too — they know what’s going on. I’m hoping more and more adults come to that realization. Yes, they are young and we need to be careful of how we talk about some things and frame things, but we need to talk.

N: What’s next for you? Do you have any other projects you’re working on?

V: I’m going to continue my ScholaR comics — I’ll continue to develop ScholaR and Rosita’s stories as a friendship, and include a new character. I want to address how boys talk about emotions or how they don’t sometimes. The next zine I have in mind is a story that shows how boys can find joy and express emotions and how they don’t have to always “man up.” I want the character to find some level of happiness or some space for him to express his emotions. It’s important to show a range of emotions and experiences.

Read “Rosita Gets Scared” and other comics by Vicko at ScholarComics.com 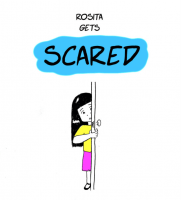 Natalia Berthet Garcia is a Mijente member based in Boston. She organizes, writes, is an abortion companion and an aspiring adult.