La Protesta- The first installment of 5 Rabbit Cerveceria’s series speaking up against injustices through art on their beer cans. 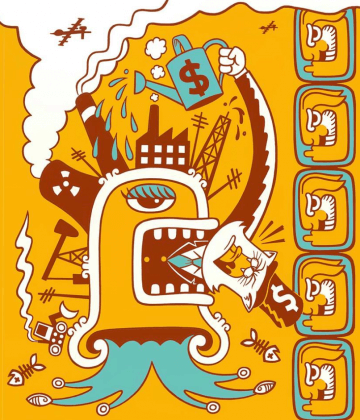 But wait a second, this isn’t just any regular beer.

5 Rabbit Cerveceria, the first US based Latin-America brewery, has recently begun tackling social justice issues by incorporating art into the production process.

It all started in June of 2015 when then presidential candidate Donald Trump made statements calling Mexican immigrants criminals and rapists. 5 Rabbit Cerveceria, who had been making an ale especially for the Chicago Trump Tower, severed ties and found themselves with a lot of leftover beer. They ended up selling the beer meant for Trump Tower to local businesses under a new name – Chinga Tu Pelo (Fuck Your Hair)- as a way of sending message of solidarity in favor of inclusion, acceptance and respect.

“As a company, an integral part of our vision reads that we are “not only based in, but also look to promote a strong and positive image of Latin America, its heritage and people.” It would be hypocritical of us to sustain the relationship.”

Andres Araya, a founder of 5 Rabbit explained, “We would be doing an injustice to the community we serve (and live in) by engaging in business with someone who does not accept our role in society and expresses a rhetoric of hate and ignorance towards us. On a personal level, if I did, one of the things that scares me the most is sending the wrong message to my daughters. We are active members of this immigrant community and we need to stand up for ourselves, and more importantly, for those who do not have the voice or means to do so. The very foundation of the United States of America was built on acceptance and inclusion. That is what drew us here, and that´s what why we feel so strongly about this. As a company, an integral part of our vision reads that we are ‘not only based in, but also look to promote a strong and positive image of Latin America, its heritage and people.’ It would be hypocritical of us to sustain the relationship.”

5 Rabbit Cerveceria has now launched a new series of beers meant to raise awareness to social issues by sparking conversations from the images on each design. A portion of the proceeds will also be donated to organizations working on these issues. I think it may be the first time in history that you can actually taste the issue you’re advocating for (it looks like environmental justice tastes like an ale).

Eric J. Garcia, the man behind the comic El Machete Illustrated and an artist I hold in especially high regard because of the awesome art work he did for the first convening of Mijente, is the creator of this can. He is a muralist, political cartoonist and teaching artist who incorporates themes of history, politics, and culture into his work.  His work has been published nationally in various forms including this beer can.

The label is a mesoAmerican glyph for earth. The heel, personified as a head, represents pachamama, mother earth, and mother earth is now getting back at fat cats that are destroying her.

His can is meant to cover the environment and seeks to tackle the immense damage being done by the new administration in such short time. The label is a mesoAmerican glyph for earth. The heel, personified as a head, represents pachamama, mother earth, and mother earth is now getting back at fat cats that are destroying her. Pachamama is now consuming the fat cat for funding, nurturing the bad things instead of good things.

When I asked him how he came up with the idea for the can, he explained that the Brewery’s name is from a Mesoamerican deity. He wanted to incorporate those elements into the environmental theme and started looking at indigenous imagery. The fact that the western world dominates the art world makes Eric’s work that much more powerful.

So, not only can you appreciate art, learn about social issues and support nonprofits, you can also find out what justice should taste like.

Jeronimo Saldaña is a member of Mijente’s commsquad best known for creating the Make America Mexico Again hats and getting Spotify to stop calling Justin Bieber a Latin King. Follow him on twitter at @jeronimosaldana