Why Is Mijente Mobilizing Latinx for Stacey Abrams?

As a national political home for Latinx and Chicanx organizing, Mijente calls for a mobilization in support of State House Minority Leader Stacey Abrams for Governor of Georgia as part of a pro-Black, pro-Woman, pro-community agenda to show Latinx power, elect progressive candidates of color, and defend US born and immigrant Latinx communities. A victory for Abrams in the Georgia Gubernatorial election could be extremely significant for the Latinx US born and immigrant population of the state who have been the target of harsh criminalization and anti-immigrant policies.

As explained by Adelina Nicholls, a founding member of Mijente and long-time community organizer based in Georgia, support for Abrams is part of defending her community. “Latinx communities in Georgia are the constant targets of attacks and criminalization. Through our support of Stacey Abrams we want to make sure that the next Governor of our state is someone who will work with us to roll back policies that prevent our children from going to college, criminalize our family members for not having access to a driver’s license, and encourage local police to act as immigration agents.”

The Abrams race also has national significance. To start, if Abrams wins the Democratic party nomination she could become the first Black governor in the United States, coming from a southern state where no democrat has been in office for the last 10 years. As Tania Unzueta, Policy Director for Mijente explains, “Abrams has the chance to be a national example of a progressive candidate of color who prioritizes the health and safety of our communities over incarceration and criminalization. We want to make sure that as Latinxs we make our best contribution to this effort,” she concluded.

For Mijente, getting involved in the Abrams campaign is part of a larger agenda to support the mobilization of Latinx people in the United States towards a pro-Black, pro-Woman, pro-immigrant, and pro-Latinx. This would be the first time that Mijente endorses a candidate for any political position. It follows our 2016 efforts, where Mijente was part of a collaboration that led the BaztaArpaio Campaign, a grassroots effort that used both traditional ‘Get Out the Vote’ and direct action strategies to oust notorious Maricopa County Sheriff in Arizona, Joe Arpaio.

Carlos Garcia, a founding member of Mijente and one of the Directors of the BaztaArpaio campaign, adds: “Black and brown communities are over policed and are being criminalized at disproportionate rates. With a bigot currently running the country, we must learn to trust and show up for each other. It is time to give Stacy Abrams an opportunity to better conditions in Georgia and raise the bar for elected officials in the South and throughout the United States. In Arizona, we’ll be paying attention and sending support to make sure Abrams is the Democratic Candidate for Governor”

Demographics in Georgia are shifting with increasing influence of voters of color and a growing young Latinx population. There is a significant number of Latinx votes that could increase turnout in the State Primaries. In a democratic primary where the election could be decided by a few percentage points, the increased Latinx support could be a deciding factor in favor of the Abrams candidacy.

Lastly, in the face of continued attacks from the state and federal government, there is a need to grow power and infrastructure in the Latinx community. Latinx population in Georgia, particularly immigrant communities, continue to be the targets of policies that lead to increased deportations and incarceration from the municipal, county, and state governments. By intentionally focusing on training and development of emerging leaders, this campaign is strengthening the Georgia and Latinx progressive movement in organizing, campaigning, fundraising, and communications, the campaign is growing a base of supporters and strengthening infrastructure in communities of color for future immigrant rights and, criminal justice reform work. 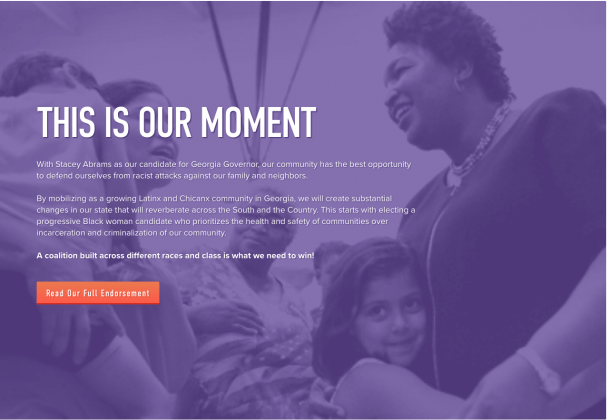 The Gente for Abrams Campaign is a Project of Mijente. Mijente is a digital and grassroots hub for Latinx and Chicanx movement building and organizing. We seek to increase the profile of policy issues that matter to Latinx communities and increase the participation of Latinx and Chicanx people in the broader movements for racial, economic, climate and gender justice. Find out more at www.mijente.net or follow us at @conmijente.