ICE Targets Undocumented Immigrants Who Share Their Story in the Media

Immigration agents claimed they pursued activist Maru Mora-Villalpando when they found her name and story in a local newspaper, labeling her an “anti-ICE” activist.

The Seattle Field office of Immigration and Customs Enforcement (ICE) released documents stating that immigrant rights organizer Maru Mora-Villalpando came to their attention after she “stated that she is ‘undocumented’ in a local web-based publication.” The document, a Form I-213, also notes that Mora-Villalpando “has extensive involvement in anti-ICE protests and Latino advocacy programs” and that she has become a well-known “public figure.”

Mora-Villalpando and supporters have requested information from ICE via Freedom of Information Act (FOIA) to find out how widespread the practice is and whether ICE is looking for other immigrant rights spokespeople.

“These documents show that ICE actions are a direct attack on our organizing and freedom of speech. We demand to know how far this practice spreads and who else they are targeting for deportation,” said Mora-Villalpando.

In addition to requesting information in her case, the FOIA, filed by Sunbird Law LLC on behalf of Mora-Villalpando and Mijente, requests documents that might show other instances where ICE is pursuing deportation proceedings against individuals who made public statements to the press regarding their immigration status, others who are involved in “anti ICE protests” or “immigrant rights” activism, and “Latino advocacy programs” and “organizing.”

“This is an attack on dissent and on freedom of speech, and a dangerous characteristic of the Trump administration. A federal government that can silence our right to political and humanitarian speech without consequence is extremely dangerous for all of us,” stated Tania Unzueta, Mijente Policy Director. “If we let the actions of ICE and the Trump administration silence immigrant rights organizers, the constitutional rights to gather, organize and advocate are at stake for all of us,” she concluded.

The documents previously obtained from ICE were requested by Washington Senator Cantwell’s office. ICE has not responded to any of the previous requests for information on Mora-VIllalpando case.

Mora-Villalpando has lived in the U.S. for over 25 years. She is a founding member of the North West Detention Center Resistance, a group that fights for detainee rights and against deportations and is member of the national Latinx organization, Mijente.

Immigration and Customs Enforcement I-213, the document where ICE lists out the reasons and information pertaining to starting proceedings for Maru Mora Villalpando. On the second page of this document, ICE describes finding Mora-Villalpando’s information in a newspaper story and calls her an “anti-ice” activist. 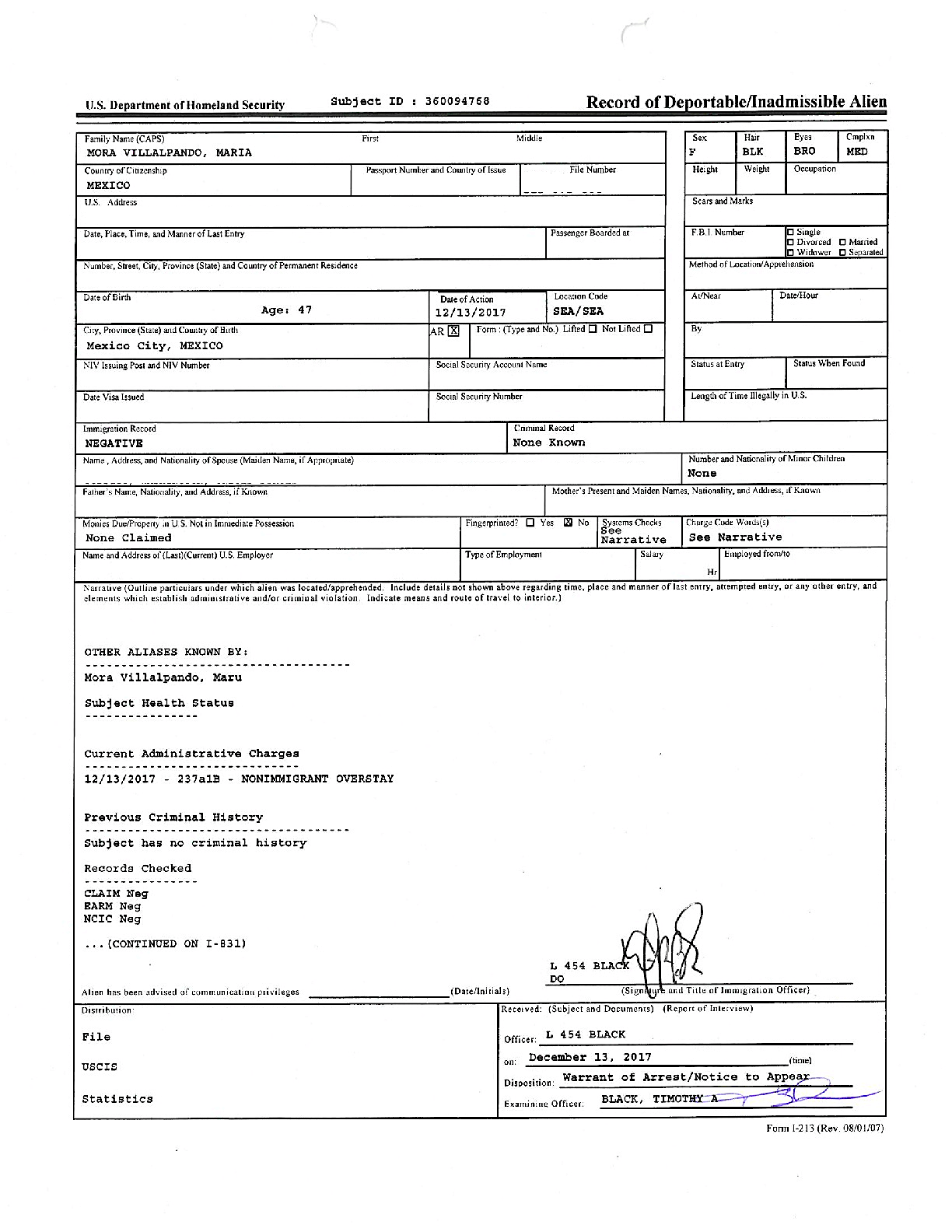 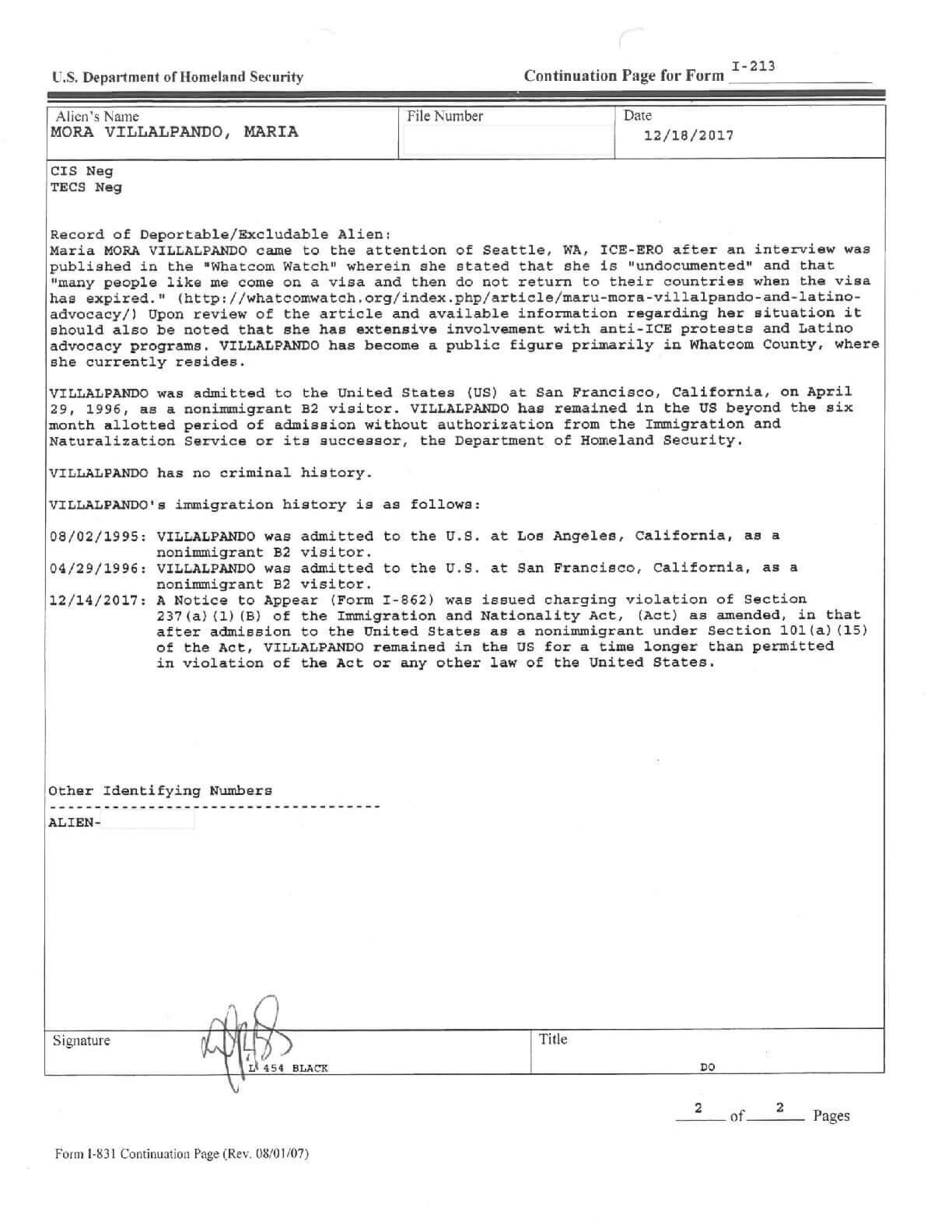 Freedom of Information Act requests filed regarding the targeting of organizers and spokespeople by ICE. 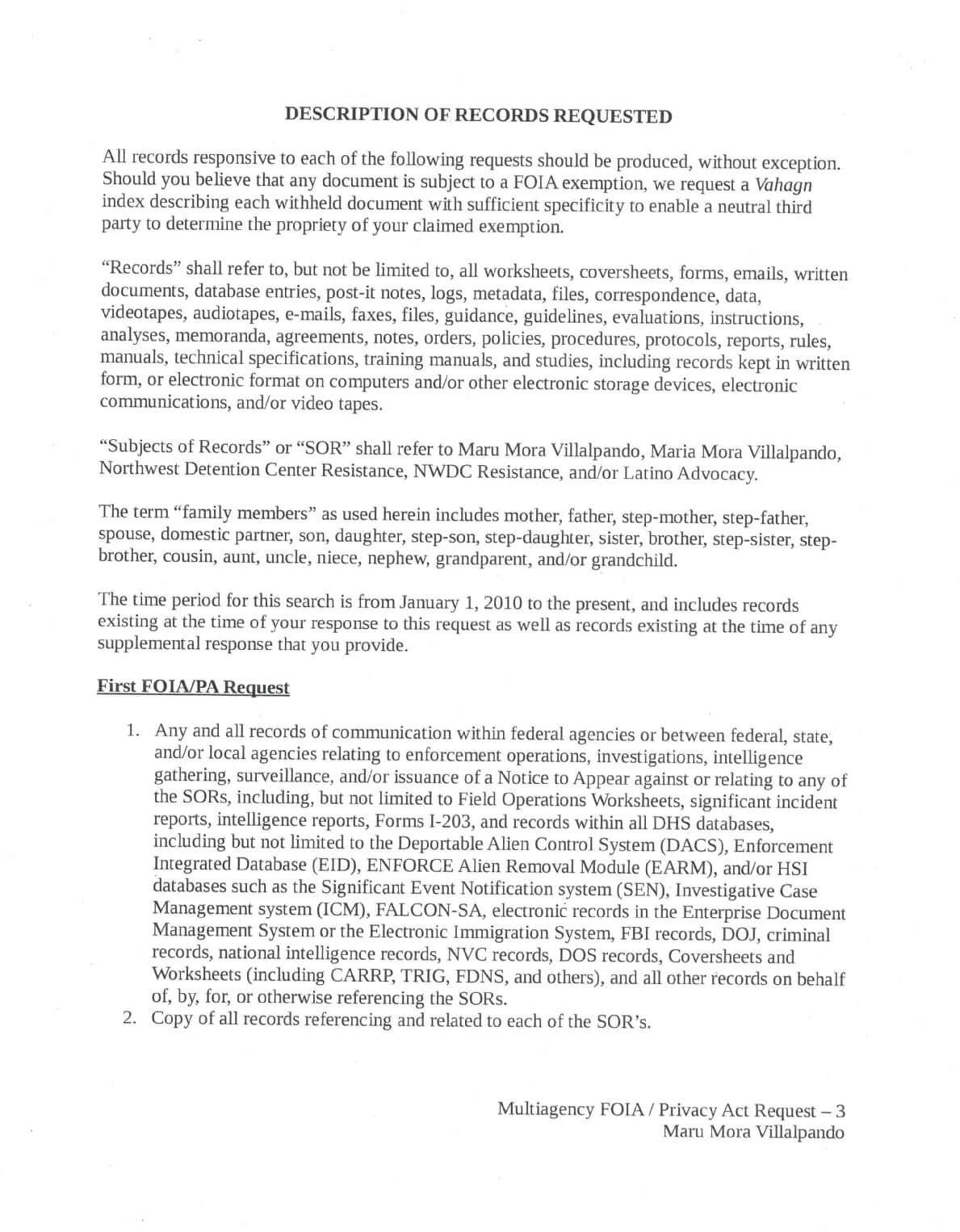 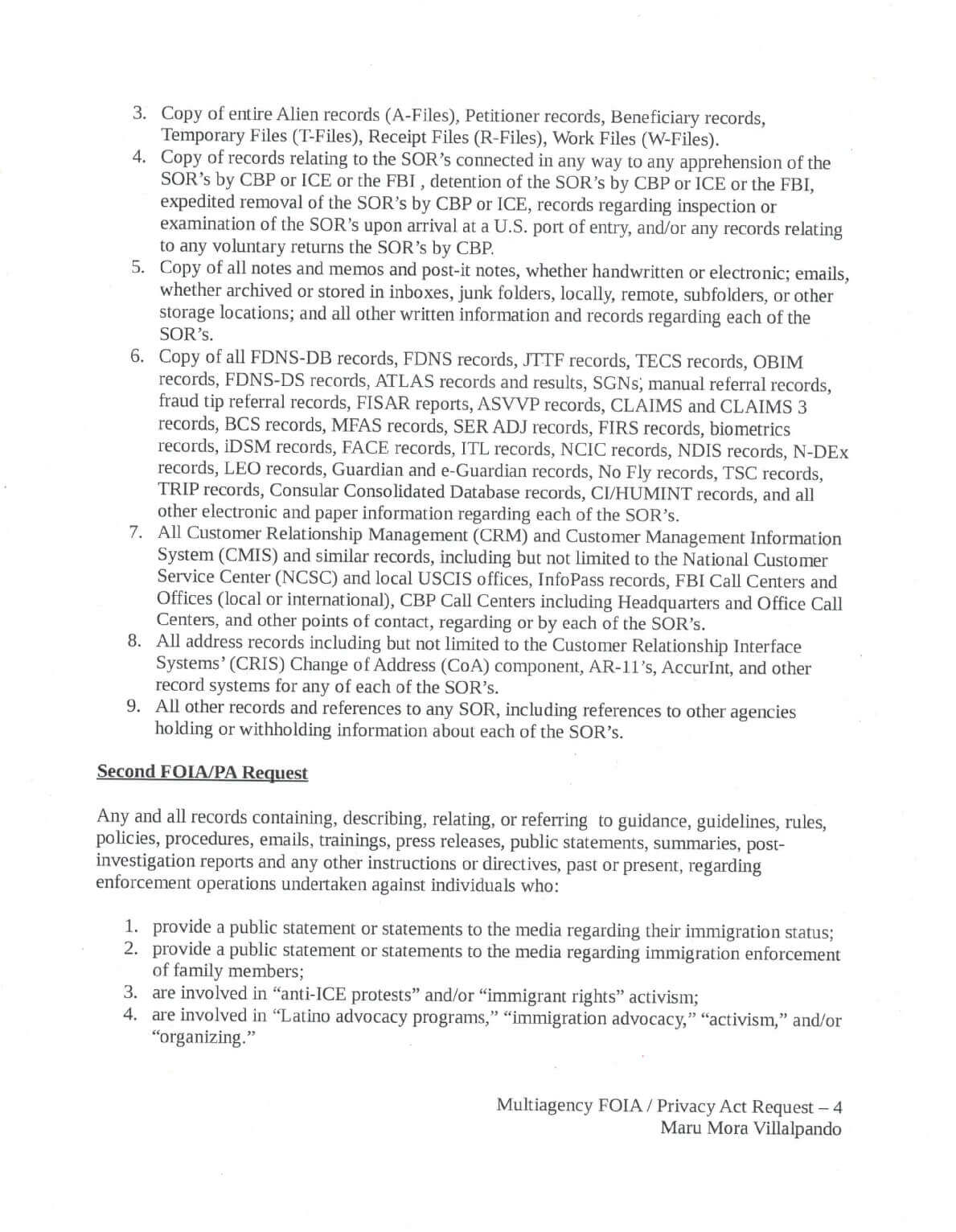 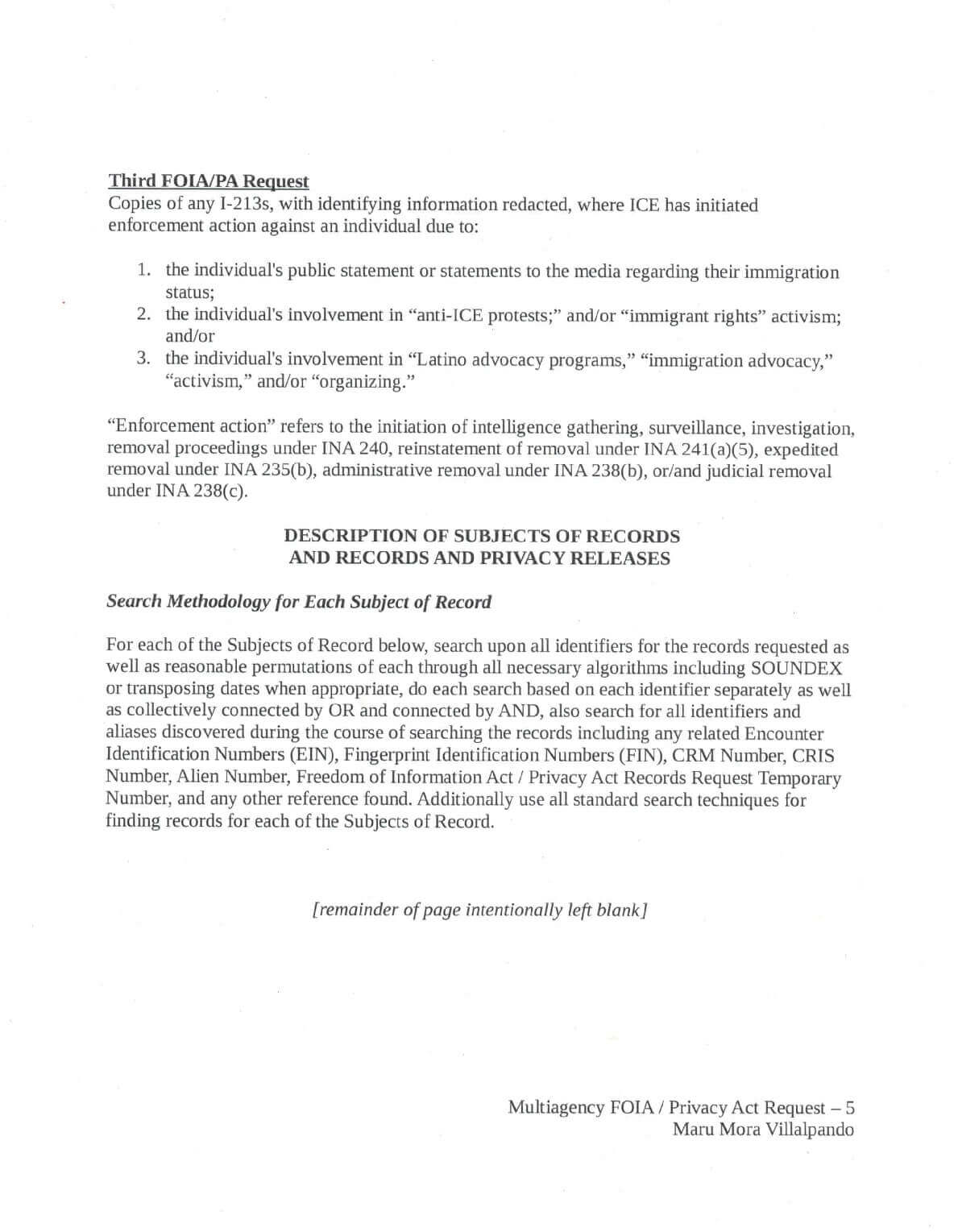