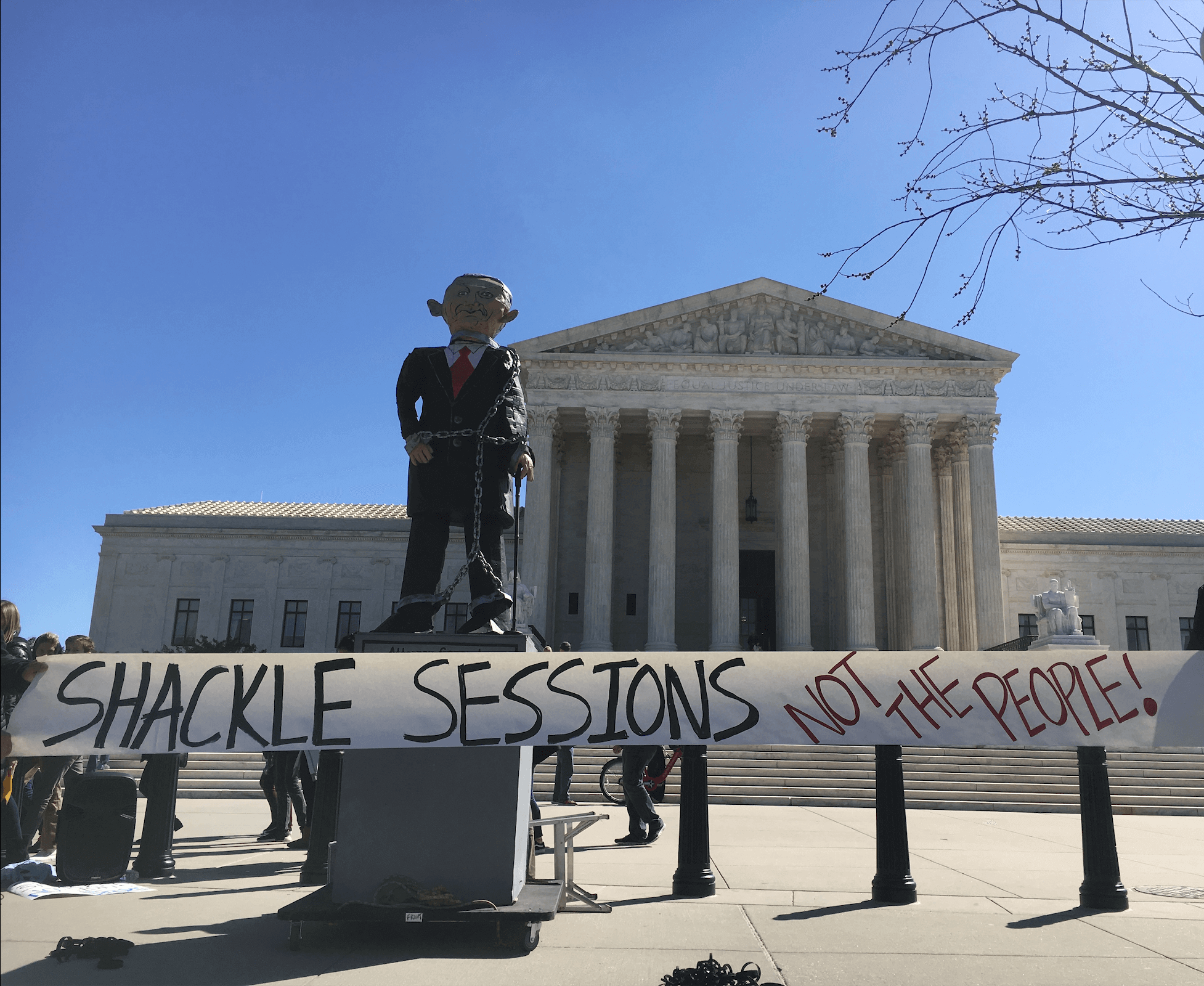 Washington, D.C. – A statue of Attorney General Jeff Sessions was be unveiled in front of the U.S. Supreme Court today by Latinx and immigrant rights organizers, calling attention to the defense of the Department of Justice in favor of chaining and shackling all people appearing before a federal judge.

In the case, United States vs. Sanchez Gomez, being heard on Monday, the U.S. Supreme Court will determine whether to reverse the Ninth Circuit’s decision holding that shackling and chaining a defendant whenever they appear before a judge in a federal court violates their constitutional rights. The U.S. Department of Justice will argue in favor of reversing that decision, allowing for the use of chains and shackles.

“We want people to see what chains and shackles look like and highlight the impact that the Attorney General’s actions have on our communities,” stated Jacinta Gonzalez, one of the organizer’s of today’s event and National Field Director at Mijente. “Since Sessions was sworn into office he has used his power as Attorney General to criminalize and incarcerate more people of color. His policies have increased prosecutions of immigrants, revived the use of drug prosecutions for incarceration of communities of color, and empowered local police departments to violate civil rights. Today in front of the Supreme Court, Sessions is arguing that as we defend ourselves from all of this criminalization and attacks, he wants us shackled and chained in front of the judge. Therefore we will be responding by saying that Sessions should be the one shackled.”

The decision of the Supreme Court would impact any defendant who is presenting themselves in front of a federal judge, including immigrants and U.S. citizens facing federal charges. The U.S. Department of Justice will argue for the shackling and against a previous conclusion of by the 9th Circuit Court that this practice violates people’s constitutional rights in June 2017.

The court case is also relevant specifically to immigrant rights, which is why the case has attracted the attention of Sheriffs around the country, who submitted a statement arguing that assuring constitutional limits to the practice of shackling and chaining immigrants would make mass criminalization and deportation less efficient. The Sheriffs and the Senator wrote wrote to the court regarding one such border criminalization program known as Operation Streamline, stating that “it requires processing so many illegal entrants that it would be very difficult to continue efficiently.”

In September of last year, a statue of Jeff Sessions was built and toppled by Mijente activists, in response to his attacks on immigrants, calling him a monument to the Confederacy. Just last week Mijente and Color of Change launched a video naming the harms that Sessions has caused to communities of color marking his first anniversary as Attorney General, urging for him to be “the next to fall.”