Stacey Abrams has the chance to be a national example of a progressive candidate of color who prioritizes the health and safety of our communities, defend immigrants and people of color over incarceration and criminalization, and if elected could be the first Black woman to be Governor in the history of the United States.

This year, Mijente launched the ‘Gente4Abrams’ campaign to elect State House Leader Stacey Abrams the Democratic candidate for Governor. It is the first political campaign to be run in the state of Georgia to target the Latinx vote.

On 5 de Mayo, Latinxs from around the country will be traveling to Georgia to participate in the largest political operation to reach out to Latinxs voters in the history of the state. Come join us to make sure that Latinxs can participate and be counted in this election, that they know the politics and story of Stacey Abrams, and to help build political power for Latinxs in Georgia.

On May 22nd, Abrams could be elected in the Democratic Primary as the candidate to face off a Republican candidate who will likely have an anti-immigrant, anti-Latinx, anti-Black, anti-poor people agenda.

We want to make sure that Stacey Abrams wins and that as Latinxs we are on the right side of history and that our community gets the best person to fight with us to protect our families. 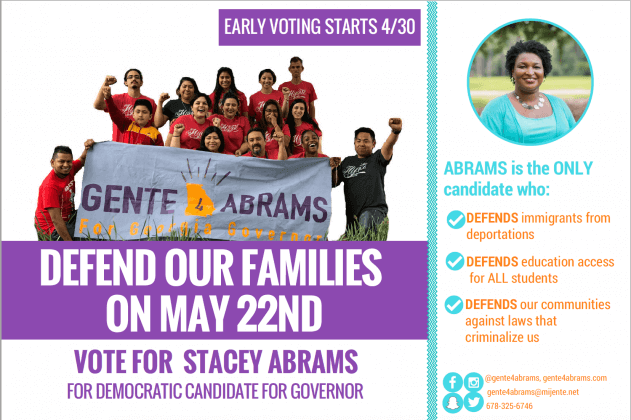