Mijente Founding Member Carlos Garcia Stepped up to run for office in Phoenix, Arizona and won: Here are 8 Highlights from his Inauguration

In case you missed it, Carlos Garcia, a founding member of Mijente and veteran community organizer won his city council election last week in Phoenix, Arizona – a city that is almost majority Latinx yet lacks candidates that truly support our community values. That’s why this year we were proud to include Carlos among our endorsed slate of candidates. At Mijente, we build the political power of our comunidad by encouraging and supporting community leaders to take the next step and run for office. Carlos was this candidate. If you’ve followed his historic organizing history in Arizona it includes many accolades: the defeat of Sheriff Joe Arpaio, innovative deportation defense organizing and powerful protests that have spread throughout the country – Carlos has been an instrumental leader in it all.

Here are 8 highlights and little known facts you might have missed from his inauguration that we can all take inspiration from.

1) It was a packed house that included many of Phoenix’s robust activist community, many of whom have been on the front lines for human and civil rights for years and were part of the effort to elect Carlos to the Phoenix City Council representing District 8.

2). The festivities were kicked off by Mariachi singers and Danza. After the event, former majority and minority leader in the Arizona State Senate, Alfredo Gutierrez remarked, “I’ve been to maybe hundreds of inaugurations like this, I have never seen anything like it.” 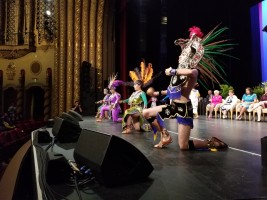 3) Carlos was sworn in by his longtime friend and Puente co-founder Jovana Renteria. Jovana has been a longtime defender of families in Phoenix, working within the legal system to free our people from deportation and prisons. If you look closely, you’ll see that Carlos sworn in with hands on the book, Occupied America, by Rodolfo Acuña: a book that shaped the Chicanx movement, identity, and politics. 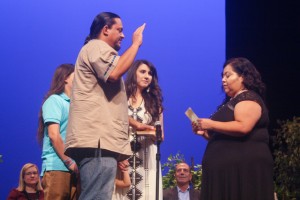 4). Unite-HERE was in the house strong, with one of their own leaders, Betty Guardado being inaugurated  to District 5. Longtime labor leader and California State Senator Maria Elena Durazo and State Rep. Athena Salman led the invocation by reading the Prayer of the Farm Workers Struggle.

5). The Barrio First fellows – the young people who helped knock over 60,000 doors in District 8 – made an appearance. The group chanted, “It is our duty to fight! It is our duty to win! We must love each other and protect each other. We have nothing to lose but our chains.” 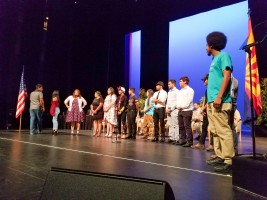 6). Carlos’ speech had many highlights, including a pledge to be unapologetically progressive and a special shout out to his mama, pictured below. You can catch the video here.

7). Another facet that was very rare: Carlos introduced the staff team that will work for District 8:  – Cymone Bolding, Adriana Garcia Maximiliano and Jacqueline Garcia. Cymone, who will serve as Chief of Staff, addressed the crowd. 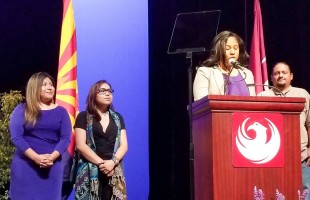 8). Our very own Marisa Franco, executive director of Mijente, gave the closing speech – calling attention to the years of organizing battles against SB1070 and Sheriff Arpaio, crediting the advancements to the efforts and courage of many people. She closed with a special call to action, that—as we face new challenges, we must continue to organize.