As of late October, a ruling by a federal judge set a new precedent for private detention centers in Washington.

GEO Group, the company that runs the Northwest ICE Processing Center for immigrants, must pay people who are detained and working in the facility the state’s minimum wage.

Here’s the story on how our compas from La Resistencia, an organization composed of community leaders who’ve personally been impacted by ICE, worked with immigrants inside the detention center to help make this happen. 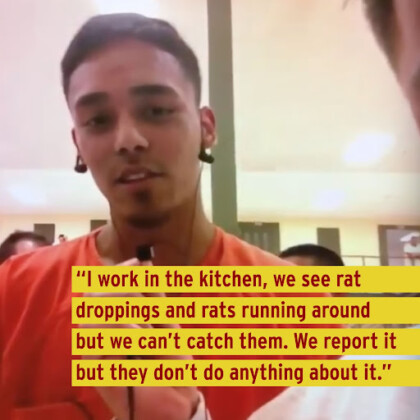 Thanks to the organizing efforts of our compas and the courage of our gente inside who spoke out, thousands of people who were locked up in the Northwest ICE Processing Center (NWDC) are now eligible for back pay in a multi-million dollar class action lawsuit. The GEO group will have to start paying working detainees $13.69 an hour, which is Washington state’s minimum wage.

The GEO group has exploited thousands of gente detained at its Tacoma, WA facility by having them perform all kinds of cleaning tasks and upkeep for the facility — preparing meals, cleaning toilets, washing floors. For a full day’s work at the for-profit detention center they are paid only $1 per day.

La Resistencia is an organization made up of community leaders who’ve been detained or have had a loved one detained by ICE. Their purpose is to do everything in their power to shut down the Northwest ICE Processing Center. In 2014 they helped organize the first hunger strike by working directly with the people detained. La Resistencia advocated and sounded the alarm on the demands of those on strike: better food and pay. Since then, gente detained have endured meals that often include rotten food made in kitchens infested with rats and the exploitative $1 a day wage.

Since then, La Resistencia has been there, working with people on the inside to tell their stories, expose the harm inflicted on them, and provide a platform for their demands. They launched a hotline to expand their reach and to help people get released and returned to their families.

After years of this work, the team at La Resistencia has learned how to develop relationships with immigrants who are detained and word of their work has spread. They’ve earned trust in the community. They’ve supported many other hunger strikes to improve conditions in the detention center. They’ve helped countless others obtain release. They’ve worked with the loved ones of those detained, lawyers, elected officials and so many others to expose the harms of the detention center and advocate for its closure.

They’ve taken thousands of calls on their hotline and plan to continue taking them. The relationships developed and the trust granted gave them vital information and evidence from inside the detention center for years. It’s these very relationships and information sharing that helped build the case against the multi-billion dollar company, GEO.

Maru Mora Villapando, leader of La Resistencia, wanted this to be clear to everyone who learned their part of the story: “It was the people who were detained who helped build the case. They risked being deported and retaliation for speaking up.”

At Mijente, we believe prisons, detention centers – whatever you want to call them – shouldn’t exist. We want to see an end to human cages and to the criminalization of our gente. As we fight to make this happen, whether that be preventing deportations of our gente one case at a time or helping shut down detention centers, it is vital that we track wins that set large-scale, new precedents in the country. These bright spots can become future organizing targets and wins.